Why ‘Going Agile’ Can Scare People In An Agile Transformation

I work with a lot of teams and help them to adopt Agile thinking and methods. While I am pretty passionate about Agile and many of the team members I work with are as well, there are others who I work with who are afraid of Agile. To tell them the organization is ‘going agile’ is threatening.

Reason #1 – Change of Any Type is Difficult

Many of us like to think we embrace change. And certainly we do – we change and evolve all the time. But that doesn’t mean it is easy.

In his 2005 book Change or Die: The Three Keys to Change at Work and in Life, Alan Deutschman describes a study of heart transplant patients. These are patients who were receiving a new heart because their old one failed. Amazingly when given a choice to either change their lifestyle to be more healthy or face death, 90% did not make the choice to change their lifestyle! 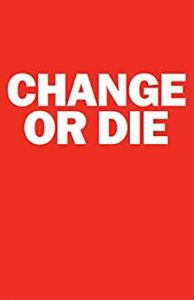 Change in an Agile Transformation is massive. Ironically, the people who are pushing the change are generally not the ones who are most impacted by it. They are trying to get others to change and adopt a new way of working. (This includes Agile Transformation coaches like myself!) That can also cause resistance to change because no one wants to be changed by someone else.

Reason #2 – Agile Is Frequently Used as a Weapon

Some people feel that Agile is used against them. They believe it is really just a way for organizations to get more work out of their employees. There are several discussions online on Dark Scrum and Weaponizing Agile; using Agile Methods to actually abuse rather than empower employees. See my recent article on Bad Scrum.

It can happen that managers preach about the importance of Agile but pick and choose which parts they like and apply. Or they talk a good game about empowerment and then undermine team self-organization as described in this blog. If managers are not changing the culture and team members aren’t really empowered, then you are not becoming more agile.

At a recent client who is just beginning an Agile Transformation, the Scrum team was told they were now able to self-organize and make their own decisions. They reported to the development manager who heard the same message.

Unfortunately, the development manager heard it but chose not to empower the team to self-organize. This manager continues to make decisions for the team, meddle in team dynamics, and try to control everything that happened on the team.

Reason #3 – An Agile Transformation May Make Things Too Transparent

Most agile frameworks espouse transparency as a key value. During any type of Agile Transformation, this transparency to the work being done may be new and unsettling. It can be most difficult for team members who may feel exposed or vulnerable, especially in the beginning. Agile teams put it all out there.

The team’s work for the sprint is clearly identified on the task board. Every day they get up in front of their team and share what they are working on and their progress (or lack of progress). Everything is out in the open.

Some Scrum team members like this. They tell me it is great to see what their team members are working on; to work together as a team. Others don’t like it so much.

Managers usually love the idea of transparency, but only for their employees and not for themselves. When it comes to transparency at the management level, there is often some pushback. They tell me “we can’t let our people know about that”. Why not? Will people freak out? Maybe we don’t think of our employees as adults.

Reason #4 – On A Scrum Team, I am No Longer Special

Another thing that can scare people about agile is that it is highly team oriented. While individual performance is important, the focus is on how the team is performing as a whole.

There is also a lot of talk in agile about the importance of T-shaped skillsets. That means that individuals will have a deep primary skill, but that they will be building secondary skills. This makes them more well rounded, able to do more tasks, and it makes the team more flexible. And agile.

What about those team members with special or unique abilities? Or those that aren’t interested in learning other skills? What about the java developer who doesn’t want to waste their time or stoop to testing?

And then there are those that are the key person on an application or expert on a particular business function. And they value that or believe that it protects their job. The may falsely believe that their job security is based on hoarding knowledge and being the key person.

I received a lot of backlash for a recent post on the Business Analyst role on a Scrum Team. Generally, business analysts want to be treated as special and not interchangeable team members.

Generally, with Agile, we strive to reduce bottlenecks caused by unique skillsets or special people on teams. We encourage aggressive cross-training to eliminate key person dependencies. We reduce “specialness”.

I remember a particular developer in an organization who had a good reputation as a developer. He declined the opportunity to join a Scrum team because he felt he was better than everyone else and didn’t want to be on a team with those he viewed beneath him. He was an eagle that didn’t want to be stuck with the turkeys.

In many organizations, agility was sprung on the employees. They didn’t have a choice nor were they consulted. I’ve heard of organizations where someone in the C Suite proclaimed that by year end they would have have 75% of their projects using Agile.

This approach can alienate people and make them feel like victims. And it triggers their resistance to change. For ideas on better ways to introduce Agile, read the Bank of America Agile Transformation Success Story.

Some employees have been around long enough to know that with an Agile Transformation “this too shall pass”. They don’t believe that managers will follow through on the change, so they don’t get too excited about it. They’ve seen the movie before and know how it ends.

Managers get excited about the latest bright shiny object – training on lean 6 sigma and getting your greenbelt, or implementing test automation, Dev Ops or Agile Adoption. Cynical employees know that most managers have short spans of attention and will eventually lose interest in a long-term change initiative like an Agile transformation. [See also Most Agile Transformations will Fail]

The tyranny of the urgent will dominate and sap the will to change.

What do you think – why do you think employees might fear Agile? Would the suggestion to ‘go agile’ be threatening?