I’ve been writing about Disciplined Agile (DA) since PMI bought them in 2019, including my recent post about the confusion around PMI Agile Certifications. It turns out that my earlier predictions about the marriage of PMI and DA were mostly correct!

On September 1, PMI announced their new approach for agile certifications. They have refined the 6 certifications they bought with disciplined agile, the existing PMI-ACP and a new one from Flex to create 5 certifications: 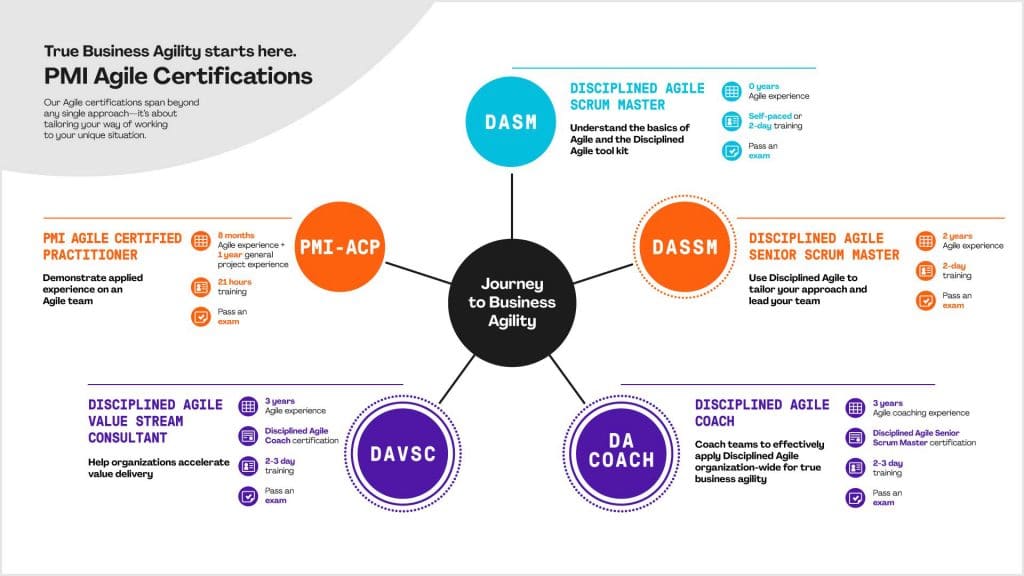 Given DA’s prior sniping about Scrum and their disdain for what they call prescriptive approaches, it is ironic to see two of the five certifications are for “Scrum Masters”. You can get all the details on the PMI site here: PMI Journey to Business Agility

PMI and Disciplined Agile Seem to be a non-Event

The thing is, while I have been banging on about PMI and the acquisition for the better part of the last year, most of you are yawning. So what, who cares? you seem to be saying.

Are you disinterested because it is PMI? Or because it is Disciplined Agile? Are you comfortable with your SAFe or Scrum approaches and not interested in learning more? Is PMI not a credible source of training and certification leading to business agility?

And what happened to those people who were using Disciplined Agile before PMI bought them? These are questions I am very curious about. I would like to understand whether Disciplined Agile is going to flourish under PMI or quietly die.

So I looked to the publicly available information. Each year the VersionOne / Collabnet / digital.ai Annual State of Agile Report asks the question about the agile methodology used by respondents. Scrum is always the big winner with 70-80% of the respondents claiming it, depending on how you interpret the 9% who say they use other/hybrid/multiple methodologies (see below). 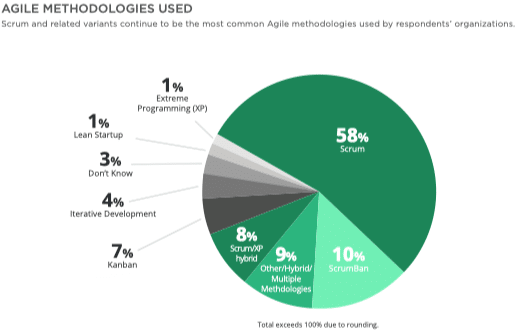 Later in the report, it shows the responses to the question of scaling method. Disciplined Agile Adoption seems low with Disciplined Agile Delivery getting 4% of the vote, on par with Large Scale Scrum (LeSS), Enterprise Scrum, and Lean Management. These are all dwarfed by SAFe and Scrum of Scrums. 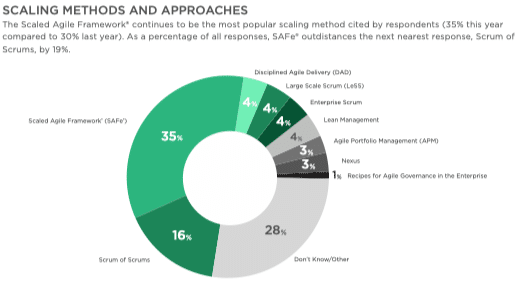 Will you humor me though with a quick survey? I designed a quick anonymous survey of 4 questions on SurveyMonkey to learn more about people’s intentions.

Please help me out by taking the SurveyMonkey survey here.

Here are the four questions:

That’s it. I hope that people respond and let me know whether these PMI certifications are valid or whether they are pretty much dead on arrival.

Too busy for 4 questions? Take 30 seconds and leave a comment below.

While we do have some responses to the survey, there are not too many, just 19. Which is not a great sample, but, let’s take a look at them.

Question 1: Do you use a Scaling Approach today?

Question 2: If you use a scaling approach today, which of these do you use?

Not surprisingly, eight out of 19 people said they use Scaled Agile Framework or SAFe.

The next most popular response was LeSS, Scrum of Scrums and Combo, each with three votes.

Getting two votes each was Nexus, Enterprise Scrum and homegrown or custom solutions.

Disciplined Agile Delivery just got one vote out of the 19 respondents. 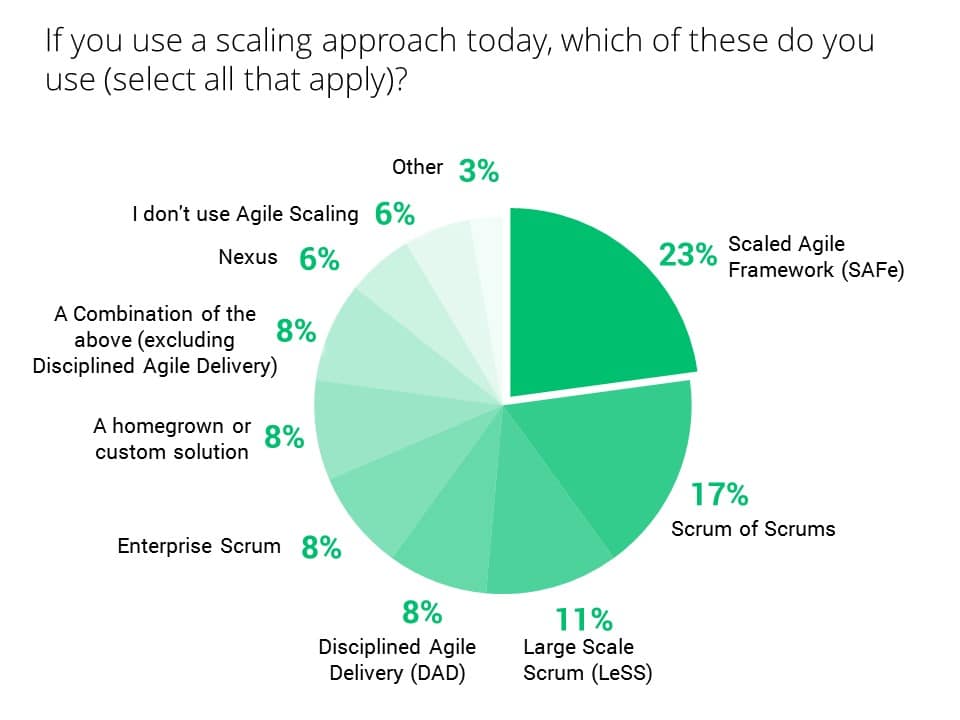 Question 3: How likely is it that your organization will adopt DAD in the near future (within 18 mos)?

The results here are pretty clear. There were two fence-sitters who said they wee neither likely or unlikely, and one person who responded that they were somewhat likely. The other 12 respondents said they were either unlikely or very unlikely. 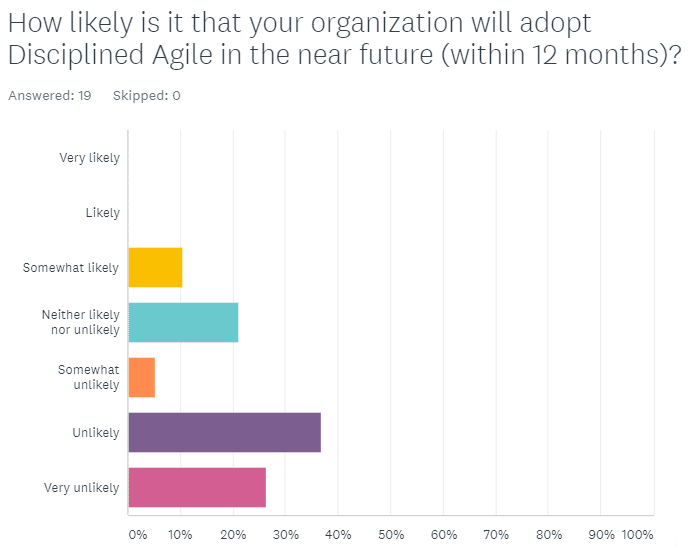 Question 4: How likely is it that you will seek a Disciplined Agile certification in the near future (within 18 mos)?

Finally we look at the likelihood of pursuing DA certification in the next 18 months. I was a little surprised to see the numbers shift from the previous question to indicate a higher likelihood of people pursuing DA certification. One person said very likely, another likely and four others said somewhat likely. Two people were on the fence and the remaining 11 people were in the unlikely or very unlikely position. 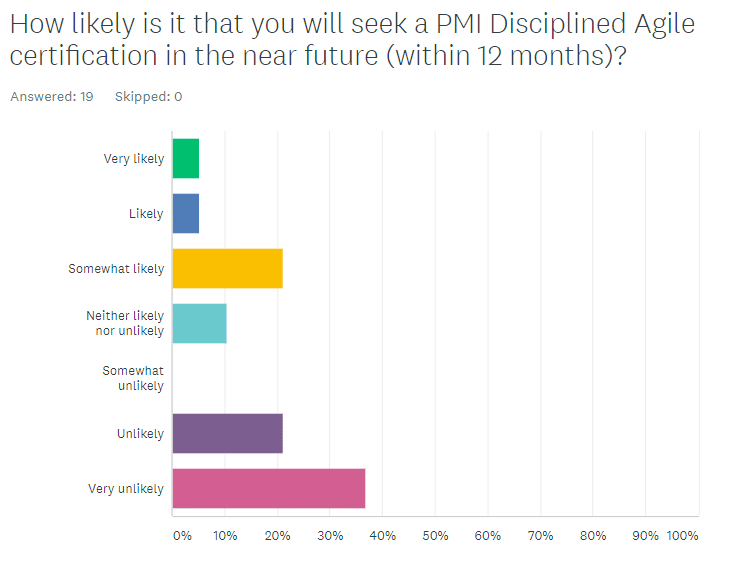 I will continue to try to get additional responses and update this chart as it makes sense.